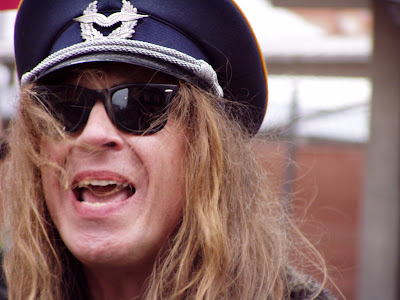 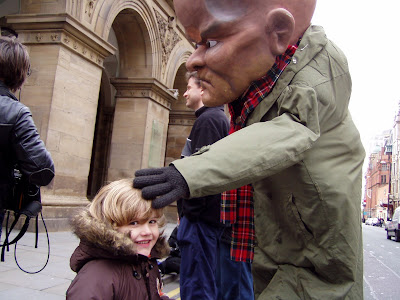 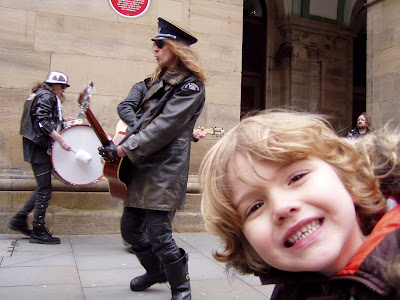 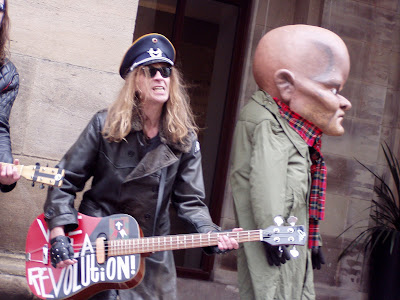 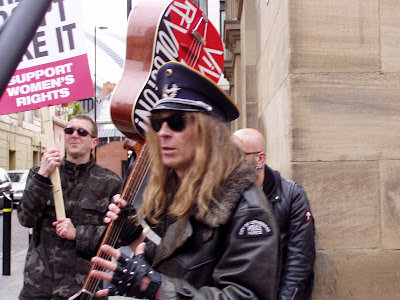 From the Julian Cope Head Heritage Website
In keeping with the theme of Julian Cope’s new album BLACK SHEEP, which advocates direct action and civil protest, the Archdrude and several of his musicians will – on Monday 27th October – embark on a 3-day-long busking tour of UK cultural centres. Accompanied by singer/guitarists Acoustika and Michael O’Sullivan, Universal Panzies leader Christophe F., and Black Sheep strategist Big Nige, Cope will commence the tour at 10 am at the site of ancient law hill Swanborough Tump in the Vale of Pewsey, and conclude on Wednesday 29th in front of the famous Carl Jung Statue in Liverpool’s Mathew Street. The entire action is dedicated to Joe Strummer, whose 1986 Clash busking tour was the inspiration. The Future is Unwritten!

There was a lot of umming and arrhing over the logistics of taking a bemused 5 year old boy to a random busking event on a freezing cold day in Manchester, with no promise of a time of arrival.
I eventually decided it was too good an opportunity to miss so thought I would combine the trip with a swimming session. MAx LOVES swimming so i knew this would get him onside.
I also showed him photos of Sqwubbsy as I knew this would help lure him into my web.
he has NO idea who Julian cope is but liked the look of Sqwubbsy!

We arrived FAR too early and had to pootle around various distractions for ages until eventually the archdrude and his rabble arrived in their big vans.

Had a quick hello with Julian and told him how long we had waited. ( nearly 2 hours...)
he said ' you have a very Utopian way of thinking...'
Which I guess is true.
he also asked me for the time which I thinks says something of his attitude to timekeeping!

They eventually assembled and brought Sqwubbsy to life and processed down onto the main road for the main event.

It would be a lie to say the whole of Manchester turned out to witness the busking but a small crowd, almost entirely of fans surrounded the band.

A few strangers wandered past but I think they scared away more than they attracted.

One girl took a look at Sqwubbsy and said 'Its scaring me. I don't like it! I want to go...

The band launched into various songs, of which some of the names escape me.
There were a few that are classics and favourites of mine
Pristeen!! - For free,and stood but 2 feet from the singer. WOW!
Rail On - The same....

Julian ranted and roused the 'crowd' and talked of the horrors and suffering of the Peterloo Massacre.
A minutes silence ensued which was very moving though did confuse Max. He is only 5 and not familiar with one minute silences.

What was weird was the way it turned from literally no event at all
Just me and Max going back to an empty street corner, to being a rock and roll event with crazed singers and their cohorts ranting and banging drums
Then they were gone.
Julian told us not to follow them, and to just dissolve into the afternoon……


Few people joined in who weren’t there for the event. Many were a bit bemused and most sadly walked on too quickly.

For More pictures go HERE
Posted by Ian at 4:05 AM