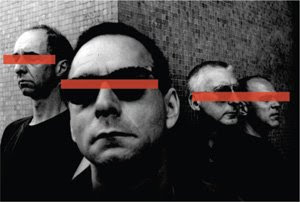 I had a superb night out on Saturday. As part of the gloriously eclectic Futuresonic festival the Academy 2 ( Students Union Hall to you and I) Wire played a blinding set. I don't claim to have intimate knowledge of the band, but I like what I know! I have a vinyl copy of ' A Bell Is A Cup' which I used to play regularly. I know Pink Flag is their 'classic' but I have never really heard it. That is not to take away from what was a superb show.
I spent the evening with good friend Kev Mann. As well as being Drummer with the Television Personalities, Alternative TV and the Creation - Kev is also a confirmed ligger. He spent the previous few days on tour with the Buzzcocks and was telling me some hilarious stories of life with Diggle et al. I heard about and saw pictures of an amazing feat by Steve Diggle at the show in Crewe the night before. During the show Steve had managed to deeply embed a champagne bottle in the back wall of the stage! Not sure exactly how he managed this, but it is an impressive feat. Especially as it was neck end in the wall. I would have thought it would have fallen out of the wall.
But no!
Anyway - The Wire show was amazing This is the first time they have played in many years, and their only UK date. Bruce Gilbert is not back with the band and has been replaced by a competent ( if rather stern looking) Margaret Fiedler McGinnis, who has played with both Laika and in PJ Harvey's backing band.

The opening few numbers seemed rather hesitant and lacking power. The fact that Colin Newman was reading all the lyrics from a Mac Laptop on a stand in front of his was rather offputting. I know it has been a long time since the band's heyday, but surely he could manage to learn the lyrics in that time?! What was amazing was the way the music built it's own momentum, and after 30 minutes had a blinding, motoring energy.

The simplicity of structure and sheer force of playing such simple songs gave the band real power. I don't know what Wire have been doing all these years, but they certainly haven't chilled out any! By the time they ended the main set the bass player was sweating profusely from under his woolly hat, and the Metronomic power of the drummer Robert 'Gotobed' was really something to see.

It is very easy to see why they were so influential. There are very obvious links to bands like Elastica ( who they sued for wholesale riff theft on ' Three Girl Rhumba.)
There are echoes of so many bands in their music.
REM were great fans and you can hear their early sound too. There were rather bizarrely 3 encores. This is very odd for a supposed punk band and the stream of going off and coming back on again got rather tedious.
For a band that resolutely 'Don't do requests. Never have!' - Colin Newman. They seemed happy to use the showbiz encore generously. A superb and fiercely energetic set. I would love to see them again and will go back and learn more of their music and history if I get the chance!

Some superb Live shots from the show
Posted by Ian at 5:41 AM No comments: