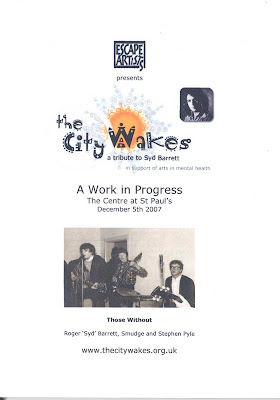 I am delighted to mention this super show that occurred in part in Cambridge this week.
The performance was only a work in progress show in readiness for a full production hopefully in October 2008 as part of Cambridge University's 'Festival of Ideas'

This text explains the show and philosophy better than I could.

The City Wakes is a multi-media arts project, produced by Escape Artists, in association with community groups in and around Cambridge, as a tribute to the legendary Syd Barrett: painter, musician and founder member of Pink Floyd.

, a charity that provides arts-based education and support services to people with mental health problems, both in institutional settings and within the wider community.

project, that culminated in a sell out production, with a standing ovation, in King's College Chapel

in September 2005 (read what people said about the Cantata here).

All the songs performed in the City Wakes have been written by Syd Barrett, and include such classics as Bike, See Emily Play, Dominoes and Arnold Layne.

At the end of quite a lengthy development phase, probably lasting about two years, the City Wakes will be presented as a professional production; including new versions of many of Syd Barrett's greatest songs, fab retro lighting effects, film and dance.

We are delighted that Syd Barrett's sister, Rosemary, has lent her support to the City Wakes. You can read why she is doing so, and of her interest in arts in mental health, here.

I think it is wonderful that people travelled from all over the world to witness this show. Such dedication is really warming!

While I was unable to get to Cambridge for this show I hope I can get to Cambridge when the full production launches and witness what will hopefully be the first of many projects inspired by the creative influence of Roger. I look forward to the future and what amazing events it may well bring!