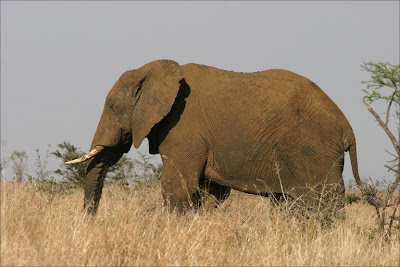 I couldn't resist quoting this incredible article from 'The Times'. What could be more hilarious than the thought of an elephant on Acid. Obviously the result was a sad and unexpected one, but it odes beggar belief that someone thought it would be a good idea in the first place!

When Warren Thomas, the director of Lincoln Park Zoo in Oklahoma City, approached Tusko the elephant with a syringe full of LSD in 1962, he thought that he was about to make a major contribution to science.

Within a few moments of being injected, Tusko began trumpeting furiously, before keeling over as if he had been shot. An hour later, he was dead. “It appears that the elephant is highly sensitive to the effects of LSD,” Thomas and his colleagues concluded.

Some 35 years after his demise, Tusko’s role in the history of science has been recognised with first place in a list of the ten wackiest experiments of all time, compiled for New Scientist magazine.

He has also inspired the list’s author, Alex Boase, to assemble many more strange studies in a newly-published book, Elephants on Acid and Other Bizarre Experiments.

“I started collecting examples of bizarre experiments years ago while in graduate school studying the history of science,” Mr Boase said. “I confess I had no profound intellectual motive; I simply found them fascinating.

“They filled me with disbelief, astonishment, disgust and — best of all – laughter. With hindsight, perhaps there is a deeper message. These experiments are not the work of cranks. All were performed by honest, hardworking scientists who were not prepared to accept common-sense explanations of how the world works.

“Sometimes such single-mindedness leads to brilliant discoveries. At other times it can end up closer to madness. Unfortunately, there’s no way of knowing in advance where the journey will lead.”

A curiosity-led experiment from the 1960s, in which Warren Thomas decided to inject an elephant named Tusko with 297 milligrams of LSD — about 3,000 times the typical human dose — to see what would happen. The idea was to determine whether the hallucinogenic drug could induce musth — the state of temporary madness in which male elephants become aggressive.

The result was a public relations disaster: Tusko died. The scientists claimed in their defence that they had not expected this to happen — two of them had taken plenty of acid themselves, they said.

2) Terror in the Skies

Another 1960s experiment, in which ten soldiers on a training flight were told by the pilot that the aircraft was disabled, and about to ditch in the ocean. They were then required to fill in insurance forms before the crash — ostensibly so the Army was not financially liable for any deaths or injuries.

They were actually unwitting participants in an experiment: the plane was not crippled at all. It revealed that fear of imminent death indeed causes soldiers to make more mistakes than usual when filling in forms.

In the 1930s Clarence Yeuba, a Professor of Psychology at Antioch College in Ohio, formed the hypothesis that people learn to laugh when tickled, and that the response is not innate. He tested it on his son — the family was forbidden from laughing in relation to tickling when he was present.

Leuba’s wife, however, was caught some months later bouncing the boy on her knee while laughing and saying: “Bouncy, bouncy.” By the time the boy was seven, he was laughing when tickled — but that did not stop Leuba trying the experiment again on his sister.

In 1924 Carney Landis, of the University of Minnesota, set out to investigate facial expressions of disgust. To exaggerate expressions, he drew lines on volunteers’ faces with burnt cork, before asking them to smell ammonia, listen to jazz, look at pornography or place their hands in a bucket of frogs.

He then asked each volunteer to decapitate a white rat. While all hesitated, and some swore or cried, most agreed to do so — showing the ease with which most people bow to authority. The pictures, however, look quite bizarre. “They look like members of a strange cult preparing to offer a sacrifice to the Great God of the Experiment,” Mr Boese wrote.

Robert Cornish, of the University of California at Berkeley, believed in the 1930s that he had perfected a way of raising the dead. He experimented by placing corpses on a see-saw to circulate the blood, while injecting adrenalin and anticoagulants.

After apparently successful experiments on strangled dogs, he found a condemned prisoner, Thomas McMonigle, who was prepared to become a human guinea pig. The state of California, however, refused permission, for fear that it would have to release McMonigle if the technique worked.

In 1942 Lawrence LeShan, of the College of William and Mary in Williamsburg, Virginia, attempted subliminally to influence boys into stopping biting their fingernails. While they were asleep, he played them a record of a voice saying: “My fingernails taste terribly bitter.” When the record player broke down, he stood in the dormitory repeating the phrase himself.

It seemed to work: by the end of the summer, 40 per cent of the boys had stopped biting their nails. Mr Boese, however, has another explanation: "'If I stop biting my nails,’ they probably thought, ‘the strange man will go away.’”

Martin Schein and Edgar Hale, of Pennsylvania State University, devoted themselves to studying the sexual behaviour of turkeys in the 1960s, and discovered that the birds are not choosy. Taking a model of a female turkey, they progressively removed body parts until the males lost interest.

Even when all that remained was a head on a stick, the male turkeys remained turned on.

Vladimir Demikhov, a surgeon from the Soviet Union, revealed his surgical creation of a two-headed dog in 1954. The head of a puppy had been grafted onto the neck of an adult German shepherd. The second head would lap at milk, even though it did not need nourishment — and though the milk then dribbled down the neck from its disconnected oesophagus. Both animals soon died because of tissue rejection — but that did not stop Demikhov from creating 19 more over the next 15 years.

Stubbins Ffirth, a doctor training in Philadelphia during the 1800s, formed the hypothesis that yellow fever was not an infectious disease, and proceeded to test it on himself. He first poured infected vomit into open wounds, then drank the vomit. He did not fall ill — but not because yellow fever is not infectious. It was later discovered that it must be injected directly into the bloodstream, typically through the bite of a mosquito.

In 1960 Ian Oswald, of the University of Edinburgh, sought to test extreme conditions for falling asleep. He taped open volunteers’ eyes, while placing a bank of flashing lights 50cm in front of them, and attached electrodes to their legs that administered electric shocks. He also blasted very loud music into their ears.

All three subjects were able to fall asleep within 12 minutes. Oswald speculated that the key was the monotonous and regular nature of the stimuli.