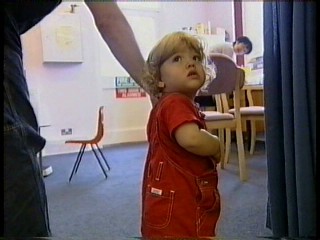 MAX BARRETT IS FAMOUS !!
Max and Daddy were on the ITN national news on Friday Night!!

I took him into Chorlton for his MMR, which was stressful enough in itself, only to discover that there was a film crew esconsed in the clinic!!! AAARRRGH
They asked if I minded him being filmed for the news, and also asked to interview me for the item - about a new report stating that MMR was safe to give.
My interview was V Poor as I was super stressed after my first time taking his buggy on the bus and thankfully they used a mummy instead.
They filmed all of Max's rather painful injection - HE DIDNT ENJOY IT AT ALL!!
and then lo and behold we ended up on the 6.30 and the 10.30 national news!!
what fun
I'll try and get it streaming very soon but My Daddy made a rather big file of the piece and it needs techno shrinking......
Posted by Ian at 1:34 PM